The Pictorial Webster’s is, in simplest terms, an artistic visual reference of what was important to 19th Century America.The 400 plus page volume is printed with the original wood engravings and copper electrotypes of the Merriam-Webster dictionaries of the 19th Century; namely the 1859 American Dictionary of the English Language (the 1st illustrated dictionary in America), the 1864 edition of that same Dictionary, and the 1890 International Dictionary. The Engravings are arranged alphabetically, a system of organization long shunned by lexicographers because alphabetical order grants no intrinsic meaning to any given grouping of words, but it is perfect for a book that creates its own immersive experience in imagery of a time gone by.

The Pictorial Webster’s is not to be understood as mere visual reference. I believe a person instinctively tries to find the connection between things when they are grouped together, and so when confronted by combinations of two or more images the mind looks for a link to give their grouping meaning. My hope is readers will “read the text” by relaxing their minds in studying the pages to allow their subconscious-ness to supply the connective meaning between images. The key-words at the tops of the pages might supply a theme to a reader, or merely be worked into one’s own narrative. In this way the book becomes a true surrealist experience. 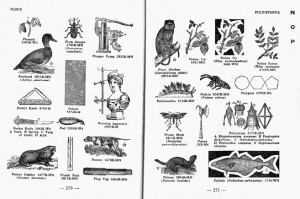 From the prospectus I created for the book, I write:

New ideas don’t spontaneously generate themselves, but come from the new combinations of old ones. In this vein, the Pictorial Webster’s acts as a visual Finnegans Wake of 19th Century America. Each reader will arrive at his or her own interpretation of the 400 plus pages of engraved images arranged with an artistic eye and loose adherence to alphabetical order. The reader will be free to appreciate each image or page on its own, or to string them together to make a visual stream of consciousness story full of new ideas sparked by forced associations.

The book is also a meticulously printed study of the art of 19th Century scientific and black-line wood engravings. To an engraving, the printing in this book is of better quality than the printing in the original dictionaries. Details are revealed that were lost in the original printings as this book is printed for the engravings rather than for the text, on better quality paper, with a more sophisticated press, and it is being printed with the engravings or electrotypes as opposed to stereotyped plates which would have been used for the edition printing of the dictionaries.